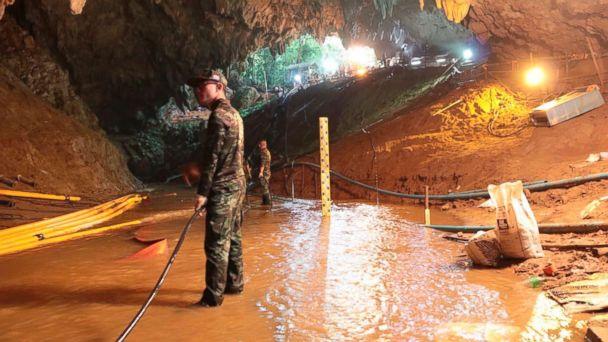 Rescuers in Thailand have retrieved the first of the 12 boys who have been trapped with their football coach in a cave for two weeks.

Four of the boys were extracted from the cave a couple of minutes apart, immediately placed into ambulances and rushed to a hospital, according to report from the country.

Authorities said at a press conference Sunday morning in Chiang Rai province that they made the decision to rescue the boys as oxygen drops and the threat of monsoon rains approaches. Due to the length of the journey out of the cave, officials said the first boy was expected to come out at 9 p.m. local time, which is 10 a.m. Sunday Eastern time. The officials said the operation could take two or three days.

At 10 a.m. local time, 13 foreign divers and five Thai SEALs entered the cave to begin the operation. Two divers will escort each of the kids out of the cave.

“We have a fraction of a second to help them come out,” provincial Gov. Narongsak Osatanakorn said.

It will take five hours for rescuers to reach the boys from the entrance of the cave, and six hours to bring back the boys, including an hour break time. Ten divers headed to chamber 9, where the boys are located, while the others will be located along the difficult route out of the cave system.

bOYSCAVEThailand
Share
Subscribe to our newsletter
Sign up here to get the latest news, updates and special offers delivered directly to your inbox.
You can unsubscribe at any time

Bring governors to justice over alleged stealing of security votes, SERAP to Buhari