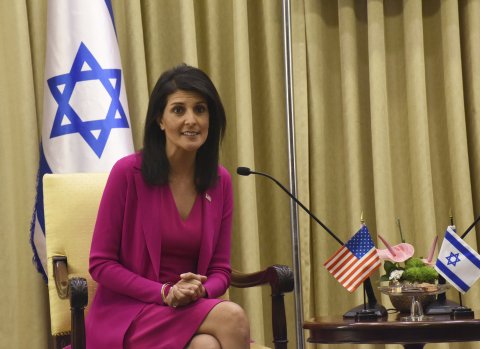 The United States withdrew from the U.N. Human Rights Council on Tuesday after no other countries “had the courage to join our fight” to reform the “hypocritical and self-serving” body, said US Ambassador to the United Nations Nikki Haley.

“In doing so, I want to make it crystal clear that this step is not a retreat from our human rights commitments,” Haley said.

Standing with US Secretary of State Mike Pompeo, US Ambassador to the United Nations Nikki Haley slammed Russia, China, Cuba and Egypt for thwarting US efforts to reform the council.

She also criticised countries which shared US values and encouraged Washington to remain but “were unwilling to seriously challenge the status quo.”

The United States is halfway through a three-year term on the main UN rights body and the Trump administration had long threatened to quit if the 47-member Geneva-based body was not overhauled.

“Look at the council membership, and you see an appalling disrespect for the most basic rights,” said Haley, citing Venezuela, China, Cuba and Democratic Republic of Congo.

Haley also said the “disproportionate focus and unending hostility toward Israel is clear proof that the council is motivated by political bias, not by human rights.”

She said the US withdrawal from the Human Rights Council “is not a retreat from our human rights commitments.”

U.S withdraws from UN Human Rights Council
Share
Subscribe to our newsletter
Sign up here to get the latest news, updates and special offers delivered directly to your inbox.
You can unsubscribe at any time