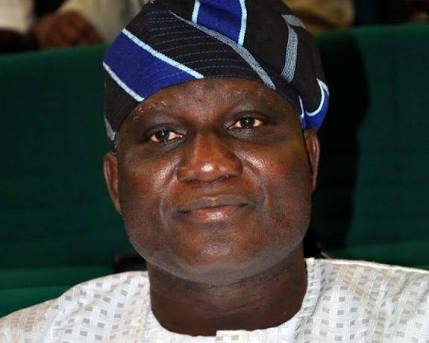 Deputy Speaker of the House of Representatives Hon. Yussuff Lasun has declared that nothing will distract him from seeking the mandate of the people of Osun to serve them as the next governor of the state.

” I have the people of Osun in my heart and I am ready to do everything possible to take that state out of its present economic challenges,” he declared in a chat with journalists.

“look at my track records, I have invested all I have in life in the state. All my investments are in Osun. Where a man’s treasure is, there his heart is. I know some of them who take whatever they have by way of investments and they situate them elsewhere”.

The deputy speaker said regardless of sponsored  political blackmails, threats and politically inspired smear campaigns from known elite quarters within and outside the state, to muscle him out of the governorship race of Osun state, he is determined to enlist  the support of the masses of the state.

Lasun said “Those who are engaging in all sorts of blackmail against me are doing so because of my growing political acceptance anchored on my role as a party man and identity that is known to anybody who knew about our struggles of the past in our dear state”.

“I am prepared to keep serving my people and they are behind me and I will not abandon them for any blackmail no matter where the threats, smear campaigns or is blackmail coming from. I will not allow the blackmail to distract me from seeking the mandate of the people of Osun state in the next election,” Lasun declared.

The deputy speaker who lamented the absence of prevalence of smeared campaigns in the pursuit of political office said “people are prepared to employ any means to pull you down” stressing however that those engaged in the pull down syndrome  were doing so because “they are afraid of the salient records of my commitment to service dedicated to a better life for the people of Osun”.

“I am a man of the people”, the lawmaker declared adding that he has a record of unflinching service to the party as a true progressive and  “ready to continue the personal sacrifices to make my people happy. The interests and welfare of the people of Osun state is uppermost to me and I am going to put all that I have to get the peoples mandate to become the next governor of the state,” Lasun said.

Lasun advised all political actors in the state to as a matter of priority “put the interests of the people of Osun at the center of their campaign,” nothing that “the reason we are seeking to govern is to be able to improve the welfare and wellbeing of the people of the state and that’s exactly why I intend to do when am given the mandate to lead the state”.

Meanwhile, Legislative Writers Association (LWA) have urged the Deputy Speaker not to be distracted by political enemies who are bent on dragging his name in the mud

In a statement by its national coordinator and secretary. Austen Odey and Johnson Eze,  the body urged Lasun “not to be distracted in his service to the House of Representatives and indeed Nigerians, asserting that the many projects and interventions using his legislative relevance to attract marks him high among other contenders.

They encouraged the Deputy Speaker to stay focused and take all the smear campaigns as a source of renewed strength in the pursuit of a better life for the people of Osun stressing that “in the fullness of time you will be vindicated”.

LasunOsun state
Share
Subscribe to our newsletter
Sign up here to get the latest news, updates and special offers delivered directly to your inbox.
You can unsubscribe at any time

Federal High Court Ruled On Power Of Appropriation In 2016