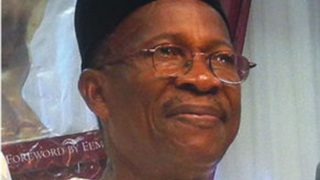 Former General Secretary of the Nigeria Union of Petroleum and Natural Gas Workers (NUPENG), Chief Frank Kokori, said president Buhari was the least person expected to honour Abiola, saying it was a confirmation that Buhari has a great soul.

” We thought people like Obasanjo should have done that for us long time ago, he said Tuesday at the June 12 celebration inside the State House Conference Presidential Villa. “There was so much pressure not Muhammadu Buhari, we least expected it, so in doing it for us, he has a great soul and we appreciate it.

“If this is coming 25 years later, it means one day your your country will remember you because some of us felt when we came out of Abacha’s gulag and we were not recognized, I just felt what sort of country is this. Like my personal experience as one of the most famous prisoner of conscience in the world, I saw that my country did not even appreciate the four years I spent in one of the worst cells in the world. And we did all these for our country and the country did not recognize us.

“So, now we are happy and we are very grateful to our President, the least president we expected who should have done this, Muhammadu Buhari. ”

The regime of the self-styled military president, General Ibrahim Badamosi Babangida, annulled the June 12, 1993 presidential election widely adjudged most freest and fairest in the nation’s history.

On how he felt about the recognition he said, “I feel very elated, I feel very proud, my family feels very honored that all the suffering was not in vain and that the Nigerian people have a chance of better governance in future.”

On on the assumptions that his father would have rejected the award if he was alive, he said, “I know he would have taken it, I know my father more than anybody. There are two reasons why he would taken it, one, because June 12 was actualized, two, because MKO Abiola was recognized as President elect. And you can see from the suggestion at the Senate that they are going to eventually declare the election result and he is going to be given all his benefits after 25 years which he has lost. So, for that reason that is victory for him because he went through hell and high waters to make sure that June 12 was actualized.

Ganiyat Fawehinmi: Thank God in alive to witness this

Fawehinmi’s wife Ganiyat on how she felt about the honour done her husband said, “I was a bit disturbed.  Every time the security will come, turn our house upside down, even his office was broken into, they took away many files during IBB regime and they were not returned till date. So I just thanked God that I am alive to witness today and I know that my husband will turn in the grave for this June 12 that is being actualised because he really fought and died for it.

“I believe God has a purpose for it, I believe that is how God wants it because you can’t run a race ahead of God. So, God has a purpose of actualising it today which is exactly 25 years after Hole ‘93 when Abiola wanted to be the President.”

Former governor of Ogun State, said Buhari with the conferment of award has demonstrated he is courageous to do what others could not do.

“I was just telling Chief Kokori that the fact that the two of us our alive to witness the event of today is a thing of joy.  Because, Kokori became the last man standing when everybody was taken And I was wrongly accused which is not true. So I am happy that we are all alive today.