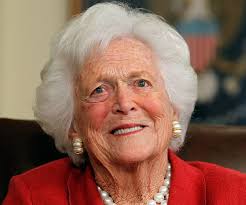 Former U.S  first lady Barbara Bush, the wife and mother of two presidents, has decided to end medical treatment for a life-threatening illness.

Family spokesman Jim McGrath announced on Twitter Sunday that Bush, 92, made the decision after consulting with her family and friends.

“It will not surprise those who know her that Barbara Bush has been a rock in the face of her failing health, worrying not for herself — thanks to her abiding faith — but for others,” he said.

Her husband, George H.W. Bush, the nation’s 41st president, is now 93 years old and struggling with a Parkinson’s-like disease that forces him to use a wheelchair and made it difficult for him to speak.

Her health deteriorated along with her husband’s. Both were hospitalized simultaneously — Mrs. Bush with “fatigue and coughing” — in the days leading up to President Trump’s inauguration last year and were unable to attend.

Just this month, the former first lady wrote about her husband in a note for the spring edition of Smith College’s alumnae magazine.

“I am still old and still in love with the man I married 72 years ago,” she wrote in the life updates section for the magazine.

Barbara BushUS
Share
Subscribe to our newsletter
Sign up here to get the latest news, updates and special offers delivered directly to your inbox.
You can unsubscribe at any time

Trump to meet with Buhari at White House on April 30