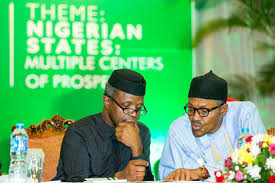 Share
The Aso Villa Chapel,  together  with the Christian Association of Nigeria (CAN), is planning a 61-hour-nonstop-praise concert in commemoration of the 61st birthday celebration of Vice President Yemi Osinbajo.

The essence of the forthcoming gathering is to acknowledge the grace and blessing of God over Nigeria “because He has given us the finest of leadership; the President and the Vice President, said Chaplain of the Aso Villa Chapel, Pastor Seyi Malomo, in Abuja Saturday.

“Aso Villa Chapel and all the churches with the backing of Christian Association of Nigeria are very much spearheading the programme, he said.

“Last year, the Vice President celebrated his 60th birthday. Out of respect, loyalty and sensitivity to the mood of the time, he celebrated it quietly. Though the church wanted to join him in celebration as it was a Special Birthday: a Diamond Jubilee, there was a need last year, to focus on praying for Mr. President’s full recovery.

“We know that it has been challenging but victory is assured. Even Prophet Moses that God used to bring the Israelites out of Egypt and Slavery on the way to the promise land faced challenges to the point that the same people threatened to go back to Egypt,” he said.

Pastor Malomo said as the Vice President  marks his 61st birthday on March 7, “the best we can do and the best he desires of us is to praise God for him because when we praise God, he will heal Nigeria and solve all our numerous problems.”

According to him, God’s word says in Psalm 127, except the Lord builds, the labourers will labour in vain.

In other words, he added, no man can help a country or a state except God helps him.

He said: “The church’s coming together to praise God is to release that help for all our leaders at all levels while thanking him specially for the Birthday Celebrant, Mr. Vice President. We know he is a very conservative person; he doesn’t like any noisy celebration bordering on  flamboyance. But we also know that he is a Pastor. So, if we praise God for his life and for been kind to him and his family this 61years, it is very much welcome.”

Pastor Malomo said the event, which will begin at 6am on Monday, 5th March, 2018 at Sharon Ultimate Hotel, Garki, will be climaxed and concluded in the last 7 hours at the National Christian Centre, from 12noon to 7pm on Wednesday, March 7th.

“The event is a 61-hour Nonstop Praise Concert. As noted above, it will start on a Monday. That is, March 5th at 6am at Sharon Ultimate Hotel and it will end on Wednesday, March 7th at 7pm. Its important to emphasise that the last 7-hour is going to hold at the National Christian Centre, that is from 12pm to 7pm.

“The highlight of the Concert is the 12, 000 Mass Choir that will sing Hallelujah related praises to God to be concluded with the rendition of Handel’s Hallelujah Chorus. It will be a wonderful event and sight to be in and behold.

“It will also be online, there will be Live Coverage by most Media Houses. So everybody could join in praise to God. When God sees that you are thanking him for your leader, He will empower and help them perform greater exploits that bring delight to the citizenry,” he said.

Aso Villa ChapelMalomoNigeriaOsinbajo
Share
Subscribe to our newsletter
Sign up here to get the latest news, updates and special offers delivered directly to your inbox.
You can unsubscribe at any time

Minister insists Buhari is doing a good job as president