Woman stolen as child reunites with mum after 40 years 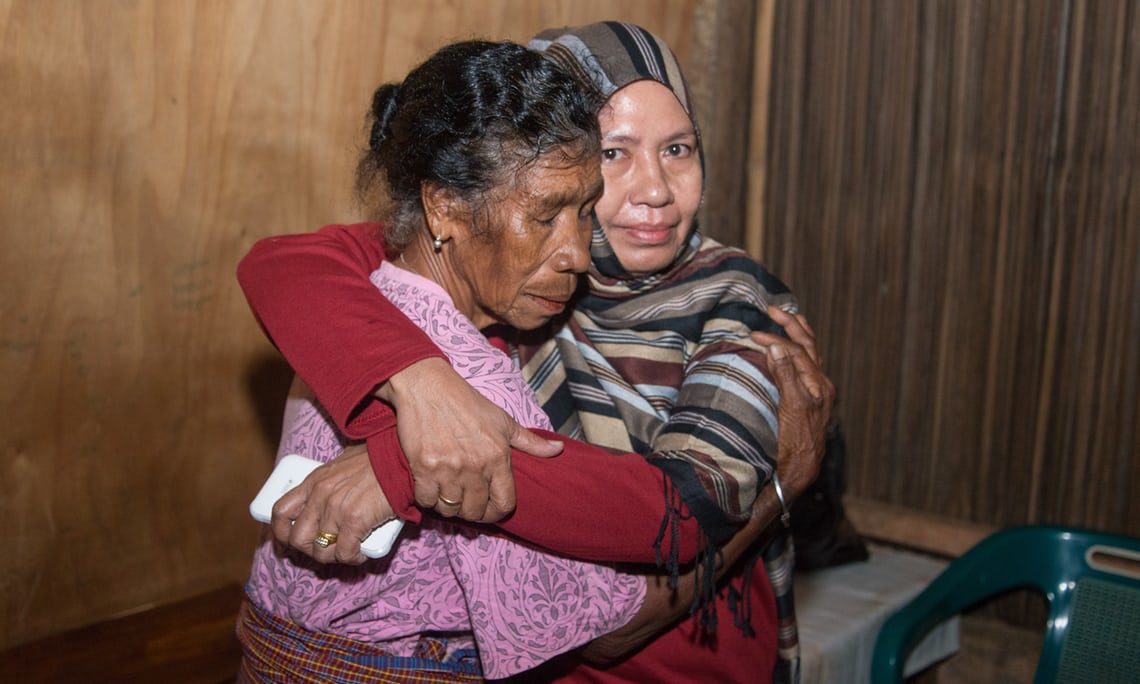 Aileu, Timor-Leste: It was 39 years since Kauka had last walked up the steep dirt road to her house in the Timor-Leste highlands, a lifetime since she was taken by an Indonesian soldier on her way home from school.

She was just eight on the day she was prised from her family of subsistence coffee farmers, her school friends, neighbours, village, and country. She remembers biting the soldier’s shoulder in protest, to little effect. Within days her parents had been forced to consent to her “adoption”. She was taken first to a nearby military tent and soon after to the Indonesian island of Sulawesi, where she has lived ever since.

Kauka was abducted in 1978, early in Indonesia’s 24-year-long military occupation of the former Portuguese colony of Timor-Leste.

But last month, aged 47, she came back — a stolen child returning to her mother.

Her road home has been pockmarked by abuse and heartache. Despite nominally becoming the soldier’s adopted daughter, Kauka was beaten, whipped, forced to cook and work, and burnt with cigarettes by his wife and family.

She converted to Islam from Catholicism and started wearing a hijab. She eventually fled to a madrasa and the house of the soldier’s sister, who “adopted” her too — until a few years later, when the sister made a deathbed request that Kauka marry her husband after she passed away.

So, in short but strange order, Kauka became the second wife of her kidnapper’s brother-in-law, stepmother to his two children, a devout Muslim, and a dedicated housewife.

And it would have gone on like that forever, were it not for the efforts of a charity set up to find abducted Timorese children and reunite them with their families. According to a 2005 report from Timor-Leste’s truth commission there are at least 4,000 cases like Kauka’s.

“Wherever there are soldiers, there are stolen children,” said Galuh Wandita, the director of Asia Justice and Rights, or Ajar, the non-profit that organises the reunions.

Last month Kauka began her journey back to her village, Berleo. She and a small retinue from Ajar ascended from the capital, Dili, in a truck that started and stopped, grinding its wheels into sheets of toffee-coloured mudwater. Local boys were rallied to tow it as Kauka watched mutely; she had mostly forgotten the local language, Tetum.

As she approached her hometown, the third of seven villages in the misty Aileu hills, crowds of residents came out to watch. One young woman came up to Kauka, curious about the hijabi visitor in a district that rarely sees new faces.

“Are you an Indonesian or Timorese?” she asked her, in effortful Indonesian.

“I am Timorese,” she said. “But I’ve been living in Indonesia.”

“How long?” the woman asked her.

The woman’s face rearranged itself. “The army?” she asked Kauka.

Around sunset the truck stopped again and more villagers came up to Kauka. They had heard she was coming back and had been her classmates: did she remember them from second grade?

Kauka looked utterly blank. She did not seem to remember them at all. She also had not been convinced a few days earlier when a man claiming to be her younger brother met her at the airport, where she arrived with Ajar in a group of 15 stolen children.

Her brother, a police officer, had managed to cross the security lines and tried to embrace her. He remembered her childhood pet name and had the same broad mouth and distinctive eyes.

But Kauka had refused to look at him. Her companions were beginning to worry they had botched the reunion.

Later, arriving in Berleo under millions of stars, the entire village trailed her from the truck to her house. There a woman wrapped in faded linen opened the door. Kauka embraced her dully and they sat down under a fluorescent bulb.

But then Kauka remembered something and took the older woman’s hand. A ripple crossed her face: there was a scar. Her mother had broken her hand when Kauka was still a child, one of the details about her family that was burnt into her mind when she was put on a one-way ship to Indonesia.

The older woman teared up and they embraced again, with force. If this was her mother, then that was her brother, and that other woman standing in the corner was her sister-in-law, and this two-year-old girl was her niece, and all these people were, in fact, her people.

That night, reunions like hers were being repeated across the tiny country as 15 stolen children, all adults now, met their families for the first time in three or four decades. They now live in Java or Sulawesi, large Indonesian islands, working as farmers, labourers, shiphands, housewives. Some had been given new names and others new religions.

Under the Suharto military dictatorship, Indonesia occupied Timor-Leste from 1975 to 1999. It was a brutal rule marked by systematic torture, rape, starvation, killings, and thousands of child soldiers, like most of the male stolen children. Ajar, which works on accountability for mass crimes across south-east Asia, has brought a total of 57 stolen children back home. It is presently the only effort from Indonesia to find their families.

This month’s trip started in Dili, where the returning adults met with Timorese officials and its human rights and truth commissions, who effusively welcomed them back and invited them to become Timorese citizens again.

But that is likely easier said than done. Most of the stolen children are too poor to afford a plane ticket, have largely forgotten Tetum, and have put down roots in their transplanted homes. And Timor-Leste is still a tiny new country of fewer than 1.3 million people, with much less infrastructure and civil society than most of Indonesia.

The stolen children’s families were told to send a representative to meet them when they landed. One man named Maritu Fonseka, now a janitor in Sulawesi, tearfully found and embraced his grandmother. Another man, Marsal Cimenes, sat forlornly to the side; he thought no one had come for him.

But it turned out that the woman was also his aunt. She took him in, too, the three of them sitting arm-in-arm for the rest of the afternoon — and the two men, who had met only days earlier, realised they were not just new friends but also family.

Their story was not an exception: two other men in the cohort found out they were cousins through the reunion process and went home together to a hamlet near the hillside town of Maubisse.

In another village near Maubisse, Miguel Amaral, one of the oldest returning Timorese, sat with his cousin in a little grey house. He was renamed Untung, meaning “lucky”, by Indonesian soldiers because he was shot at three times and survived. He has carried around a faded photograph of the soldier who kidnapped him for 40 years.

The circumstances of their return force a lifetime’s worth of emotions into a week.

Kauka went from hesitant stranger to the teen daughter she never got a chance to be within hours of her return.

“Mum, you can’t wear plastic bangles like that,” she said in broken Tetum, rolling her eyes and pulling the black ones off her mother’s wrist. By the next morning she had visibly relaxed.

“You know, it’s funny,” she said, dipping a stale Portuguese roll into very sweet coffee. “You probably don’t remember anything about your mum from when you were a child. But I did. Because I had to.”

Stolen Child
Share
Subscribe to our newsletter
Sign up here to get the latest news, updates and special offers delivered directly to your inbox.
You can unsubscribe at any time

Innoson: Hear What He Said That Got Him Arrested