Atiku, Atikulation And Other Stories by Reuben Abati 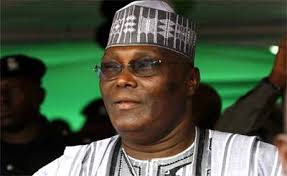 “I hear say Atiku don port oh, from APC to God knows where…”

“He used to be a Customs officer.  Going from one port to another should not be an issue or a problem for him. It is in the nature of Customs officials to go from one port to another. When they train Customs officials, they train them to just disappear to nowhere when the storm is tough and rough.  That is the reason why every Customs official is a prostitute… serving or retired. I know some of them. They are always disappearing and appearing. After oil and gas, customs is the other honey pot of Nigeria. My brother, if you taste a little of that honey pot, your tongue will come out. You will always want to taste more.”

“But Alhaji Atiku Abubakar is not a neophyte to the game. He has been Vice President to Ebora Obasanjo for eight years. And since 2007, he has been eyeing that office of President. He attempted to run in 2007, he ran in 2011, he ran again in 2015. There must be something in that Aso Rock that he is looking for.”

“Or something he kept there that he needs to go back and remove.”

“There is nothing wrong with a man seeking to rule his country, though.”

“Yes, that is why Alhaji Abubakar has been projecting himself as a man under pressure running from pillar to post, behaving like the only thing in his life is to become President.”

“To be President no be joke oh. The man don taste the thing small, na him know wetin the thing be?”

“But God has blessed him. He has a University. God has given a mere Customs officer the opportunity to educate Nigerian children. Even Boko Haram survivors are now being educated in his university and the Federal Government is paying him lorry loads of money as scholarship. Must he be President?”

“Yes. If dem give you suya for one hand, carry champagne for another hand, which one you go take?”

“Or when you see useless people, Oga’s domestic servants and imbecilic erukus washing hands with champagne that their first to fifth generations never tasted, what will you do?”

“I swear I will step into the ring and fight.”

“Good. Atiku wants to take over. Him too wan wan taste champagne. The champagne of Nigeria.”

“But he doesn’t’ even know where he is going.”

“He knows. Talks are going on. For him to leave the APC, he must have worked out his next destination.”

“PDP? PDP is in trouble. I don’t think PDP can remove Buhari from power”.

“I have seen pictures of Atiku’s PDP campaign vehicles. It looks like he is going to get the PDP Presidential ticket”

“He has money. PDP right now needs somebody with cool cash who can challenge the APC, and fight them money for money.”

“And Atiku has that war chest?”

“He can mobilize it.”

“The PDP Governors won’t allow him”

“But why should Nigerian politicians jump from one party to the other.”

“Hunger and greed. Can’t you see that there is no Nigerian politician who is interested in ideology or ideas? They all just want position and power.”

“I can see that. Atiku for example has jumped from PDP to AC to PDP, to APC and from APC to,  well, we don’t know where next until he says so…”

“It looks like the jump of the frog to me”

“Frog?. This looks like the jump of the elephant. Atiku’s move is a metaphor for Nigerian politics. It is a sign that something terrible has happened to the ruling party.”

“I hear the ruling party says Atiku’s move is predictable and so it is a non-event.”

“Who said so? Garba Shehu?”

“You mean Garba Shehu has not spoken? He has not responded to Alhaji Atiku Abubakar’s Atikulation, especially Atiku’s submission that the APC government is a joke and a scam?”

“I checked. Somebody told me that Garba Shehu is treating an ear problem at the moment, and em ..em, that he is part of a team looking at the mysterious movement of the rats in the President’s office to the Council Chambers forcing the President to relocate the Federal Executive Council meeting to the First Lady’s Conference Room.”

“I don’t believe that. The Garba Shehu I know would have issued a statement calling Atiku a fool for criticizing Buhari and dumping the APC”

“You sef. You don forget? Garba Shehu is Atiku’s boy. He used to be Atiku’s chief spokesperson. He used to lead the assault against Obasanjo and Jonathan before he was donated to Buhari. You want him to bite his master?”

“He should do his job. We are talking about loyalty. Let him do his job or make a choice.”

“He too should port?”

“He can do whatever he likes, but at least whenever he condemns the opposition again, he should know that he is attacking the Atiku finger that fed him”

“Baba Buhari should sack her and all Atiku loyalists in the government.”

“Enemies in his government”

“You don’t know politics. In fact, President Buhari could decide to make Mama Taraba his Minister of Petroleum Resources. And Garba Shehu the Minister of Information and Atiku will know that he is just making noise.”

“Gi-di-gibe. Power-pass-power. But the Mama Taraba that I know will get angry and resign ”

“Yes. If she doesn’t resign, I trust Ibe Kachikwu to issue a statement to say that this is the very height of corruption and chicanery”

“What a country! Politics of expediency;  no ideolpgy. No party system. Anything goes”

“If you Atikulate it properly, everything will be fine.”

“I am sorry for you. I hope you are aware that articulated vehicles only bring problems. In Apapa. In Abuja-Lokoja road. Everywhere, they are causing problems.”

“Those are vehicles. Here, we are talking about a mission to save Nigeria.”

“What of Baba Bubu?”

“He has not told anybody he wants a second term. From what I see, he may opt for the Mandela option”

“He is from Katsina.”

“And you want him to be like Mandela? Have you started drinking?”

“It is in his interest not to seek a second term”

“If you keep talking like this, when they carry you and lock you up, I swear I will not bother to visit you in detention. This government has no problem with freedom of speech. It is your freedom after speech that cannot be guaranteed.”

“That is not a problem. But just think of the fact that your wife is still very young. The way this thing is going, some people will not see sunshine until after 2019.”

“Because I want a properly Atikulated country?”

“Because you don’t understand Nigerian politics. Have you not heard that even former Vice President Atiku has been asked to go to Abeokuta and beg the boss of bosses, the Ebora himself, Baba of Nigeria, Olusegun Obasanjo, if he wants to even get a party ticket not to talk of becoming President. OBJ Nigeria. No OBJ, No Nigeria. Baba Ooosa! Eruku nation. Ebora Tuaale!. Tuaale!”

“What is wrong with you? Who is Obasanjo? We are running a democracy. We should be talking about institutions not individuals.”

“Tu u danu. This is Nigerian democracy. It is the democracy of Godfathers. If some people don’t say yes in this democracy, even God will not say yes.”

“What I am telling you is that nobody can be President or displace Buhari without the approval of some entrenched powers and principalities in this country. Nigerian politics is not about democracy. We have not reached that stage. It is about power. Why do you think Senator Musiliu Obanikoro will cross from PDP to APC, and he will publicly say that Asiwaju Bola Tinubu is the best thing ever created since the invention of toothpaste?”

“I was flabbergasted to hear that”

“Don’t be shocked. That is the nature of Nigerian politics. But the truth is that Godfathers have feet of clay. In Anambra, in the last Gubernatorial elections, Willie Obiano demystified his own Godfather, Peter Obi and the man has been very, very quiet since then. He demystified those who went and borrowed Alex Ekwueme’s daughter, I mean the PDP, and the APC that went and borrowed Ojukwu’s son. Any Godfather that wants to survive should know what he is doing. Nobody should play God over Nigerian politics.”

“The way I see it, the man who will be President may not even have shown up. There is a game that is unfolding.”

“A coalition against Buhari?”

“A powerful force preaching change, more like it, brewed in the North, with a pan-Nigerian outlook. A mission to save Nigeria.”

“The next revolution to save Nigeria will come from the North. I can feel it.”

“Can we talk about something else? You know I am not a revolutionary.”

“Everything in life is a revolution. You can be Grace-fied today and be Mugabe-fied tomorrow. The Other room can be joyful today and bring you sorrow tomorrow.”

“Talking about the other room, I hear Baba now uses Mummy’s conference room in the Villa to hold Federal Executive Meetings”

“I don’t talk about mundane meetings. The entire Presidential Villa belongs to the President. He can holding meetings wherever he likes.”

“May be rats took over the Cabinet Chamber. ”

“Leave these government people. What is on my mind right now is how some people held a wedding party in Benin, and they gave out cars and I-phones as gifts and I was not there.”

“Gifts to the bride or to people who came to chop jollof rice?”

“In this Buhari recession and poverty season?”

“EFCC and SSS dey the wedding?”

“Don’t worry. We have to be smart. Anytime we hear anybody wan do society wedding, we go dey ready go there.”

“Without invitation? Even Bobrisky no fit gate-crash. I surprise say dem no invite am.”

“We will apply the Ebuka strategy”

“Iro nla. I know every gist, including the latest on Toke Makinwa. Nobody go use social media chop life on my behalf. You may not know, that Ebuka style is no longer working. I hear there is now a wedding police in Lagos. If you dress better than the bridegroom and the bride, the security people will not even allow you to enter.  Better to dress like Smartkarts so you can help collect empty bottles later.”

“I go South Africa? For Mrs Etomi wedding where dem spend Nigerian money in South African economy? That one na another gist oh.”

“Or I go Oritse wedding?”

Osinbajo: We will not permit smuggling from neighbouring countries

Jonathan lashes out at Sagay over inflammatory statements