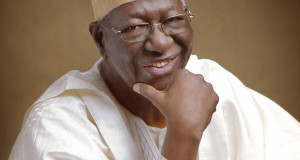 Share
…..Donates wheelchair ambulances to Geriatric Centre at UCH
Former chairman of the Board of Trustees of the Peoples Democratic Party (PDP), Chief Tony Anenih said his recovery at a United Kingdom hospital , two years ago, after an open heart surgery was a miracle.
Anenih said that the surgeons who performed the operation on him described his recovery as the first miracle ever witnessed in that hospital.
He disclosed this in a speech read on his behalf on the occasion of the Benefactor’s Lunch meeting of the Tony Anenih Geriatric Centre at the University College Hospital (UCH), Ibadan, during which he was conferred with the Benefactor Award.
In the speech delivered by his representative, Mr Giwa Aigbomiorele, he said, “on a personal note, I have faced several challenges in life but God has always showed up to grant me victory.  But for His grace, I would not have been here today receiving this award.”
Anenih, who called on well meaning Nigerians to always see themselves as their brother’s keeper by extending a helping hand to the less privileged in our society, commended the Chief Medical Director, Professor Temitope Alonge and the Management of the UCH and the Chief Tony Anenih Geriatric Centre, UCH, for considering him worthy of the great honour.
He said the prudent management of funds by the Professor Alonge-led team was remarkable.
“While it is true, that through our humble efforts, this Centre has been blessed with financial assistance, I must state that the Management of University College Hospital under the able leadership of Prof. Temitope Alonge has demonstrated a rare ability to be consistently prudent and accountable for every financial assistance received,” he stated.
According to him, “This is most commendable and in contrast to the peculiar challenge in our society, where little regard is given to the avowed duty of care and due diligence required of Trustees.
“Therefore, when recently there was a request by the Management for Wheelchair Transport Ambulances for the Geriatric Centre, I ensured without hesitation, that provision was made for the purchase of 2 Wheelchair Ambulances.”
He said his decision to accept to endow the Geriatric Centre five years ago was not misplaced, stressing that it remains one of the best decisions he had ever made in life because “only few things have brought me so much joy as the successes recorded by the Centre in just 5 years.”
Anenih pointed out that during the inauguration, he had acknowledged that the concept of the Geriatric Centre was an idea whose time had come
“This, in my view was, due to the established facts that with improved standard of living, the world geriatric population has been expanding.
“I stated that there was the need for concerted efforts to be made to provide relevant facilities to cater to the needs of the elderly in Nigeria in particular and the West Africa sub-region in general,” he added.
Anenih said it was gratifying to know that, besides the care of the elderly, the Centre also provides training opportunities in Geriatric Medicine to Resident Doctors, Medical students, Nurses, Dietetic students, and Masters students of the University of Ibadan (who are studying Medical Social Works) and also Physiotherapy students.
He said it was also gratifying to know that “the Centre now has an Elders’ Forum, which is an independent voluntary body run by its members for the benefit of its members.”
On the award, Anenih said it was with the mindset of giving his best support for the Centre and its Management, that he found the occasion most auspicious and the award (Benefactor Award) a great honour.

AnenihNigeria
Share
Subscribe to our newsletter
Sign up here to get the latest news, updates and special offers delivered directly to your inbox.
You can unsubscribe at any time

Wise men still come from the East By Femi Adesina