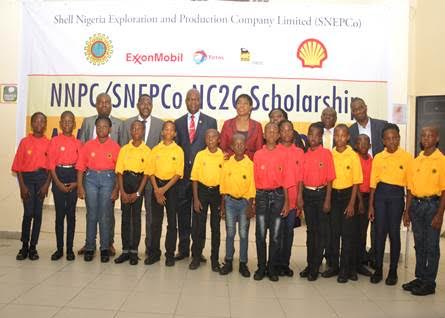 More than 100 pupils from Nigeria’s six geo-political zones have been awarded full-board six-year secondary school scholarships by the Shell Nigeria Exploration and Production Company (SNEPCo) in the third set of the NNPC/SNEPCo National Cradle-to-Career (NC2C) programme designed to give top quality education to bright but indigent youths.

During the award ceremony held at Lead Fort Gate College, Lekki in Lagos last Tuesday, Lagos State Deputy Governor, Dr. Idiat Adebule, commended SNEPCo for the success of the NC2C which she said had achieved its purpose by helping to bridge educational inequalities resulting from socio-economic differences.

Represented by the Permanent Secretary, Ministry of Education, Mr. Adesina Odeyemi, the deputy governor added, “SNEPCo has kept faith with the commitment of supporting indigent Nigerian youths to attend some of the best secondary schools in the country and helping to reduce the number of school dropout before completion of basic education.”

The Managing Director of SNEPCo, Mr. Bayo Ojulari, who was represented at the award ceremony by the General Manager Exploration, Mr. Dayo Adewuyi, said the educational initiative contributes towards the actualisation of the UNESCO ‘Education for All’ goal. He said: “We also do this because, to us in SNEPCo, education is key to national development. In the three years of the programme, we are already seeing signs of success. Last year, for instance, one of the scholars was awarded a scholarship by the implementing school because of her exceptional academic performance. So, I expect that this set will settle for no less.”

The award recipients emerged through a competitive process starting with an aptitude test which was open to graduating pupils in public primary schools in the 36 states of the federation and the Federal Capital Territory. They then underwent a two-week orientation programme with introductory courses in academics, character and psychology to prepare them for a seamless integration into their new learning environment.

The NC2C scholarships are just one of the many programmes in SNEPCo’s social investment portfolio in Nigeria. Other programmes include the equipping and donation of information technology and communication centres in many primary, secondary and tertiary institutions and hosting of health outreaches in different parts of the country. SNEPCo had recently signed a Memorandum of Understanding MoU) for the construction of a multi-million naira eLibrary for the Niger Delta University, Bayelsa State, and the company signed another MoU last week for the construction of a centre of excellence in Geoscience at the University of Lagos.