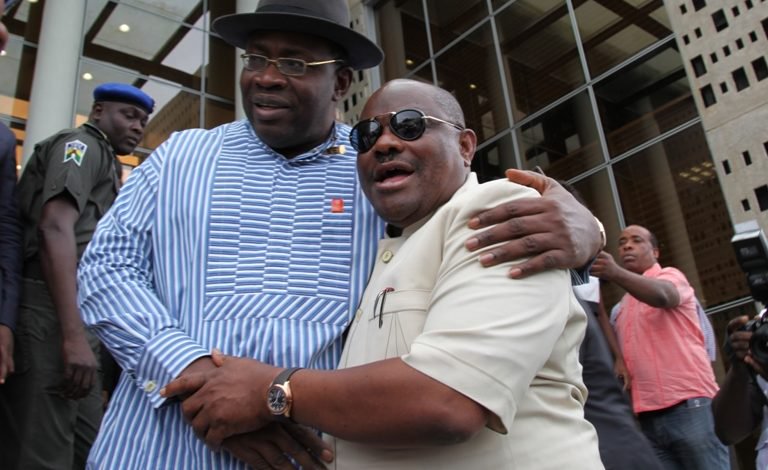 Last week delivered drama aplenty in the country. There were very interesting and, occasionally, distressing news items. We had the appointment of a young and dishy-looking woman, Mrs Zainab Ahmad as Deputy Governor of the Central Bank of Nigeria (CBN), the almighty feud between Dr. Ibe Kachiukwu, Minister of State for Petroleum Resources, and Mr. Maikanti Baru, Managing Director of the Nigerian National Petroleum Corporation (NNPC) and the unfortunate outbreak of monkey pox in Bayelsa State among others. Of considerably bigger interest to me, however, was the reported truce between the Governor of Rivers State, Chief Nyesom Wike and his Bayelsa State counterpart, Mr. Henry Seriake Dickson. It was a huge surprise to many Nigerians, lastThursday, when Wike , in company of the former Peoples Democratic Party (PDP) Acting National Chairman, Prince Uche Secondus, stormed the Government House, Yenagoa. After the customary photo ops, Governor Dickson and his guests met behind closed-doors for about three hours. Both governors emerged from the meeting hugging each other right before the inquisitive Government House correspondents, whom they later addressed.

Wike, beaming with smiles as though he had just found a long lost brother, said his meeting with Dickson was very successful and expressed willingness to regularly compare notes with the Bayelsa helmsman. He also praised Dickson for putting Bayelsa State on the path of rapid development. “I am not surprised because Dickson prepared for the office and so you can see the result. You know once you prepared for an exam, certainly you will pass very well and that is why Dickson has done very well for his people and for the Ijaw nation. What I have seen today has made PDP proud; it has made the people of Bayelsa, the Ijaw nation ‎and the Niger Delta proud,”‎ gushed the Rivers State Governor.

He particularly commended Dickson for building an iconic Governor’s Office Complex, jokingly saying that he thought his office was grand before visiting Yenagoa and adding his colleague’s office will make him return to Port Harcourt and do something about his own office..

Wike expressed his desire to partner with Governor Dickson in the area of political and economic development of the region as well as develop and share common ideas for the overall good of both states‎. He expressed confidence that his relationship with Dickson will consolidate the unity in the South-South zone.

Dickson thanked Wike for the visit and the kind words he showered on him, saying he looks forward to working with him more closely to help develop regional integration.

“We talked about a whole lot, including security and developmental matters within our region‎ and in our respective states. As we progress, you will see all of this unfold and we will do so at the regional level in conjuction with all our brother governors”, Dickson said.

The meeting came after a protracted cold war between the two governors. For long, the relationship between both men was frosty-and all fronts. The situation nearly shredded the People’s Democratic Party (PDP) and South-South development initiative known as BRACED Commission. The commission was conceived to foster regional integration and economic development among Bayelsa, Rivers, Akwa-Ibom, Cross River, Edo and Delta (BRACED).

Their feud climaxed when Wike failed to invite Dickson and Bayelsa State to the recent Golden Jubilee celebration of the creation of Rivers State, an event that should have had both states playing prominent roles, given that Bayelsa was carved out of Rivers State.

Curiously, while the feud persisted, former President Goodluck Jonathan made no effort to intervene despite being viewed as a leader to the rowing governors.

Indeed in some quarters, the belief is that Jonathan and his wife, Patience, were happy at the spat between the two governors and actively encouraged its continuation. While there is no confirmation yet that Jonathan and his wife caused the feud, no one is in doubt that Jonathan’s inability to reconcile the two governors puts a huge question mark on his personality and leadership of the South-South zone. Could Jonathan have been deriving some benefits from the quarrel? Perhaps.

My take from the truce is that Wike realised the need to mend fences with Dickson, did so with flourish and deserves commendation for placing the interests of the region above personal political interests. The cessation of the feud gives many of us and of course, the PDP and the Niger Delta, the chance to breathe more easily. It is only if the two states are at peace that the Niger Delta region will have peace. It is when the two Governors are on the same page that Rivers and Bayelsa states will continue to remain in the PDP and neutralize the All Progressives Congress (APC). For how long will the new-found peace last? Nobody knows exactly, but I hope it endures for the overall good of the Niger Delta and the PDP.