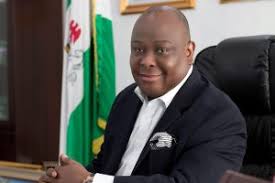 A top chieftain of the All Progressive Congress, APC and former senator representing Imo West in the National Assembly, Senator Osita Izunaso is currently enmeshed in a battle of wits to grab an apartment in the Apo Legislative Quarters and evict its rightful owner.

Claiming to be executing the judgment of the court in his favour, reports have it that the national organizing secretary of the APC, forcefully gained access to the property and removed some of the owner/occupier, Mrs. Esther Jesulanke’s fittings and belongings. It is said that he flung out the old woman’s belongings outside the property thereby damaging the fittings and belongings of worth and value in spite of a pending suit at the FCT High Court challenging an earlier court judgment.

It was learnt that Senator Izunaso, who showed more than a passing interest in the property located at Block 20, Flat 3, Moses Adasu Close, Zone D before it was sold by the original owner, had earlier deposited a paltry five million naira for the property whose value then was about N35 million in 2013.

The then owner, Mrs Grace Inyang, who reportedly put up the property for sale with plans to buy a new property in her village where she planned to relocate after retirement, was said to have rejected the senator’s deposit even though it was paid through her counsel, Barrister Victor Okangbe, for the reason that the senator did not fulfill the condition precedent to ownership rights, which was payment of the total sum of N35, 000, 000.00 required for the release of the Deed of Mortgage on the said property with Aso Savings.

She consequently assigned the property to Taulahi Investment Nigeria Ltd represented by one Hon. Jega who sold it to the current owner/occupier, Mrs Esther Jesulanke who was certainly oblivious of the transaction between Mrs Inyang’s counsel and Senator Izunaso.

Mrs. Inyang declared that the five million naira paid by Senator Izunaso to Barrister Okangbe was received without her consent and she had transferred the money back to her counsel before empowering Taulahi Investment Nigeria Ltd to proceed with the sale of the apartment to a buyer who was willing to pay the complete amount.

Now, the buyer, Mrs Jesulanke is crying out that there have been attempts to eject her by hook or crook by Senator Osita Isunazo who alleged that by a judgment dated 13th October 2013, the court gave an order of specific performance of the contract of sale between him and Mrs. Grace Inyang.  She said she was taken aback by the fact that a judgment of specific performance was awarded to enforce the said sale where Senator Osita purportedly paid a paltry deposit of N5, 000, 000.00 for a property as opposed to a part payment.

According to information, Mrs. Jesulanke’s assertion is that the transfer of the property from Mrs. Inyang to Taulahi Investment Nig. Ltd whom she derived her title from was first in time. In addition, she was a bona fide purchaser for value without any notice of any attempted sale or failed sale.

Also, that Senator Osita who was aware that there was an occupant in the premises did not take adequate steps to join the said occupant to the purported suit he filed at the High Court of Abuja. Mrs. Jesulanke was shocked to discover the attempt to execute the purported judgment against her when she had been in possession of the property as a bona fide purchaser.

Mrs. Jesulanke’s solicitors, we further gathered, have sought redress on her behalf by filing a suit for trespass against Senator Osita Izunaso at the FCT High Court in Suit No: Cv/386/2015 -Taulahi Investment Nig Ltd v. Senator Osita Izunaso & Grace Inyang. In addition, her solicitors are also challenging the judgment of the Hon. Justice Talba by filing a Notice of Appeal at the Court of Appeal as an interested party whose interest the trial court ought to have considered before giving an order of specific performance.

Mrs. Jesulanke has considered the deprivation of her property as unfair and unjust and desires her property back. However, this has proven difficult in the midst the forceful ejection and the political clout of the senator who ejected her from the property.

It is believed that Senator Izunaso is using his political clout as a former Senator and Chieftain of the ruling APC to intimidate and coerce a hapless old woman to forfeiting her property.  All attempts and overtures from this grandmother has fallen on deaf ears as he continues to threaten and harass her.

Legal experts are hopeful that the former lawmaker would respect court processes and wait for the outcome of the appeal before causing further pains to the old woman, more so, as a top member of All Progressives Congress, a political party that claims to fight corruption, preaches equity and fairness.