Andy Uba can never win any election be it free, fair or transparent, says APC aspirant 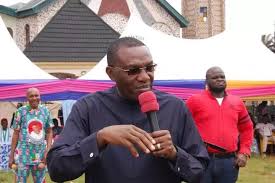 Senator Andy Uba has been told that he stands no chance of ever winning any election in Anambra state even if it were free, fair and transparent.

In an email to Per Second News Tuesday, Barr Nonso Madu, one of Anambra’s APC Governorship aspirant accused Senator Andy Uba of putting pressure on members of the committee to annul the primary election that produced Dr Tony Nwoye.

“My attention has been drawn to a petition written by Senator Andy Uba, addressed to the Anambra State Governorship primaries appeal committee of the APC. Having seen the petition, I must say that I am unimpressed that our distinguished Senator would descend to this level to tarnish an exercise that was painstakingly organised by His Excellency Governor Kassim Shettima-led electoral panel, adjudged to be the best so far conducted.

“I had doubted the authenticity of the report, due to the way senator Andy Uba commended the entire process while voting was ongoing with all assurance that he was going to emerge victorious.”

“Senator Andy Uba should spare us with the “capacity” statement which he has made a sing- song. He should know that the days of PDP abracadabra are over. He does not have the capacity to win any election that is free, fair and transparent in which votes are allowed to count hence he couldnt win the APC primaries.”

“If Senator Andy Uba’s capacity could not win him the APC primaries, he does not have the capacity to win the november 18th elections in which votes are expected to count, Madu said.

“In the petition, Senator Andy Uba accused Dr Tony Nwoye of bringing thugs/NANS members into the accreditation venue to chase away delegates. This is not true as the accreditation was conducted peacefully. Delegates were identified through the following means- Permanent voters card(PVC) National ID card, drivers license or International passport. They also came with their party membership slip with photograph issued to them by the party during registration.”

“The party had already made the delegates list available to all aspirants, 2 weeks before the primaries. With the delegates known, their was little room for manipulation.”

“The Nigerian police force led by Anambra state police commissioner Umar Garba, the DSS and other security agencies provided adequate security at the accreditation venue, making it nearly impossible for the venue to be infiltrated by thugs. Our dear Senator Andy Uba even attested to this during his interview with pressmen at the accreditation venue. The allegation that delegated were swapped is simply laughable. After accreditation, delegates were conveyed to the voting center on marked buses with full police escort. Their was no room for any maneuver as the delegates had no physical contacts with outsiders.”

‘The road leading to the voting venue was not even accessible to commutters and other road users, as it was cordoned off by security agencies, making it impossible for any non-accredited person to gain entrance to the venue, he said.

AnambraAndy UbaAPCMadu
Share
Subscribe to our newsletter
Sign up here to get the latest news, updates and special offers delivered directly to your inbox.
You can unsubscribe at any time