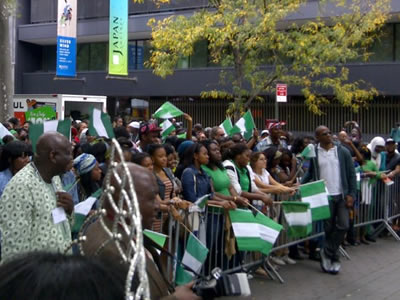 The Nigerian Association of Entrepreneurs in the United Kingdom has condemned some critics of President Muhammadu Buhari over his national broadcast to the nation, saying that such critics are ignorant and malicious by describing the speech as too short.

The Association accordingly, praised President Buhari for what it described as “a well-articulated and direct speech.”
Speaking from London with Persecond News, the chairman of the Nigerian entrepreneurs in the UK Mr. Charles Sylvester, thanked God for answering the prayers of millions of Nigerians by healing President Buhari.

According to him; “For crying out loud, this is not a budget speech. The government is in continuum as the acting president was in charge in his absence. Delivering a long speech would have rendered the work of our capable Vice President as incompetent, which would have been disrespectful and the president is wise not to do just that.”

Sylvester said members of the group are happy that the president has resumed duty, energetic and delivered a well-articulated speech which summarised the country’s situation as well as being decisive in dealing with security threats and economic security.

He further said; “This will provide assurances to foreign investors who will be encouraged to do business in Nigeria.
“The large turnout of millions of Nigerians to welcome our president despite glaring challenges is a testament of how he is dearly loved and a phenomenon. We call on all Nigerians to continue to support the president and pray that God will grant him good health and the wisdom to lead Nigeria to attain greatness.”

Diasporians
Share
Subscribe to our newsletter
Sign up here to get the latest news, updates and special offers delivered directly to your inbox.
You can unsubscribe at any time