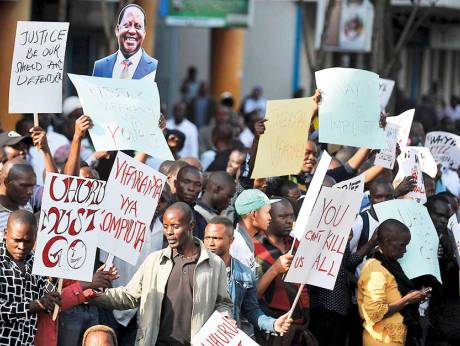 A statement from the group’s presidential candidate, Raila Odinga, and his running mate, Kalonzo Musyoka, said they turned to the court because of alleged irregularities in the Aug. 8 presidential vote.

Those included, among others, “numerous instances when their ticket was denied votes and others in which their competitor … had undeserved votes added to his total,” the statement read.

Odinga has rejected the electoral commission’s results which say Kenyatta won by roughly 1.4 million votes. He claims, without providing proof, that hackers used the identity of a slain election official to manipulate the result in Kenyatta’s favour.

The commission has said there was a hacking attempt but it failed, and election observers say they saw no signs of interference with the vote.

At first the opposition said a court challenge was not an option. But earlier this week Odinga made it clear they had changed their minds, saying, “This is just the beginning. We will not accept and move on.”
Dozens of opposition supporters gathered at the Supreme Court building throughout the day Friday, waving placards.
Police said they prevented the demonstrators from entering the building. Nairobi police chief Japheth Koome said authorities want to ensure the court is secure.
The Supreme Court has 14 days to rule on the challenge.

Kenya
Share
Subscribe to our newsletter
Sign up here to get the latest news, updates and special offers delivered directly to your inbox.
You can unsubscribe at any time

Charlottesville Was Not a “Protest Turned Violent.” It Was a Planned Race Riot