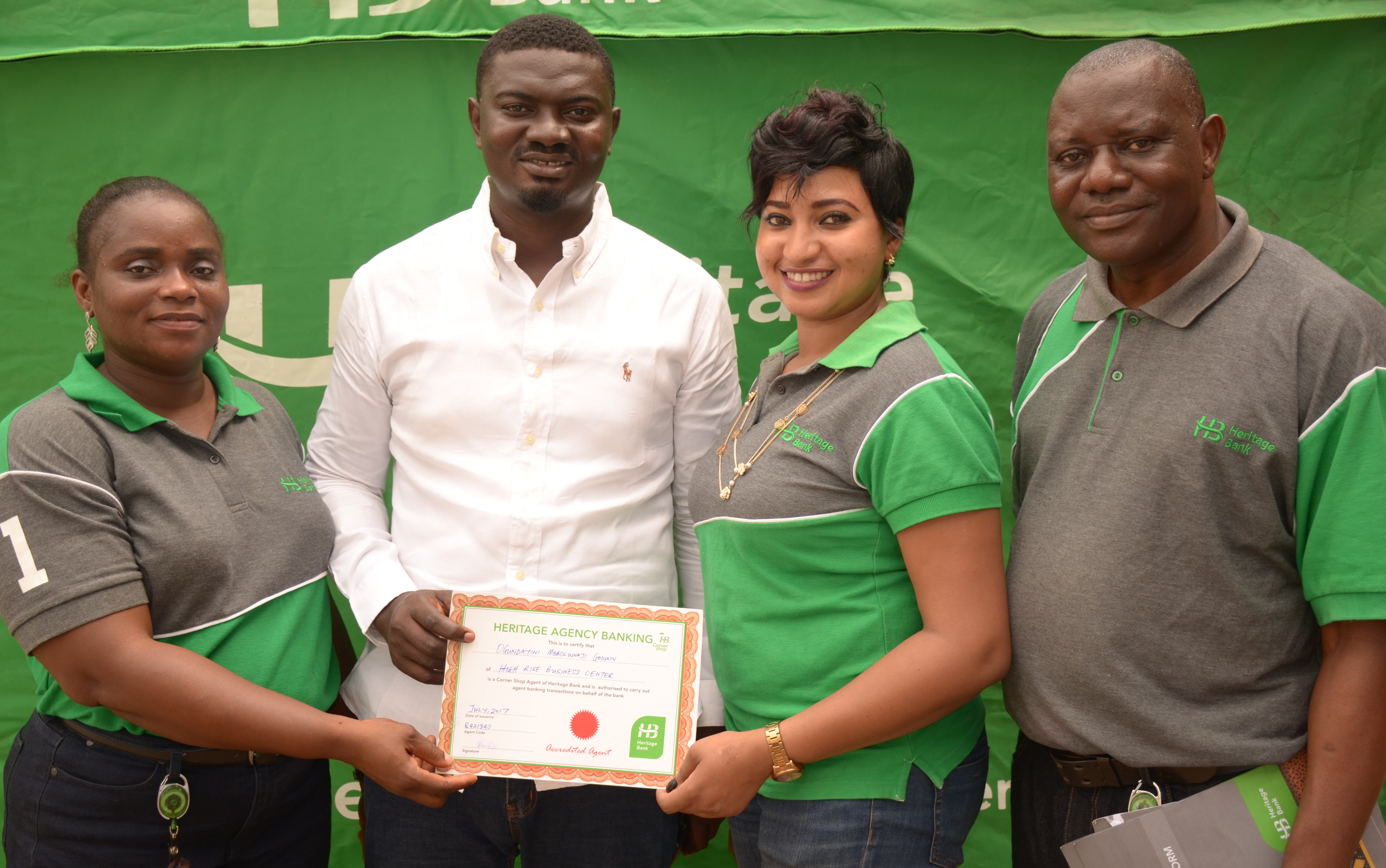 Heritage Bank Plc, has taken aggressive approach to support the Central Bank of Nigeria’s initiative to curb the unbanked Nigerians in the rural areas by 20 percent by 2020, thereby offering financial services to the nooks and crannies of Nigerian communities; providing access to underserved markets.

The policy was sequel to a research conducted by an international agency, Enhancing Financial Innovation & Access (EFINA) in 2008 which showed that about 74 percent of Nigeria’s rural community was un-banked. Against this backdrop, the CBN therefore initiated the policy with the aim of reducing the figure by 20 percent by 2020 to ensure greater participation in the nation’s financial sector.

Heritage Bank which launched the programme about two years ago, revealed at the weekend, during the signing up of two agents’ corner shops, disclosed that it would bring onboard 1, 000 agent partners by the ending of 2017.

The two corner shops opened over the weekend High Rise Business Centre in Simawa community behind Redeemed Convention Camp and Layeni Folayemi Enterprises in Omu Ijebu, both in Ogun State.

As at June 2017, the agent base had grown at an average rate of 50 new agent sign ups monthly bringing the total number of active agents to about 450 and growing. This lends credibility to the consistency of the service and how it is changing lives and empowering Nigerians across the country.

At this steady growth rate of approximately 17.5 per cent new agent per month on can say that hitting the long term vision of 100, 000 active agents in five years is well within reach.

However, to this effect, the MD/CEO of Heritage Bank, Ifie Sekibo, explained that the bank has continued to set standard in the launching of ‘Corner Shop’ to cater for the need of traders and artisans at different locations across the country.
Speaking at the commissioning of the agent, Zonal Business Coordinator, South-West, South-South, Agent Banking, Heritage Bank, Oluwakemi Adewunmi, noted that there was indeed a gap in the community without any financial institution to service the need of the people.

Adewunmi assured that with the new development, accessing banking services in Omu Ijebu and Simawa areas have become easier for all the people in the community. Her words: “It does not matter whether you have your bank account with Heritage Bank or otherwise, the mobile POS deployed by the agent will make banking at the people’s doorstep so easy and stress-free.

The latest however came with a peculiarity as a community leader and politician, Olatunde Rotimi Paseda, an indigene of Omu Ijebu released a property to the bank for the purpose of financial inclusion.

Paseda, a governorship aspirant under the Unity Party of Nigeria (UPN) in 2015 general elections, released the building to the bank in order to cushion the stress the indigenes of the locality faced anytime they wanted to transact banking business. Before now, the people living in the neighbourhood and its environs used to travel to Ijebu Ode where banks have their branches located before they could carry out even the basic banking obligation.

Mrs. Layeni Folayemi, promoter of Layeni Folayemi Enterprises, Corner Shop who made the disclosure at the launch of the agent outlet on Thursday, acknowledged that the presence of Heritage Bank in Omu Ijebu would greatly help to alleviate the pains the people hitherto experienced in accessing bank for financial transactions.

Managing Director of High Rise Business Centre, Corner Shop, Ogundayini Godwin said he set up the facility in a bid to save cost and energy for the residents of the community, adding that before the advent of the agency arrangement; people in the community used to spend about N600 to be able to withdraw any amount of money from the ATM in Redeemed Convention Camp.

He said there is high liquidity in the community with some people coming to make deposits while others come to make withdrawals.

Some of the customers were very enthusiastic with the progra