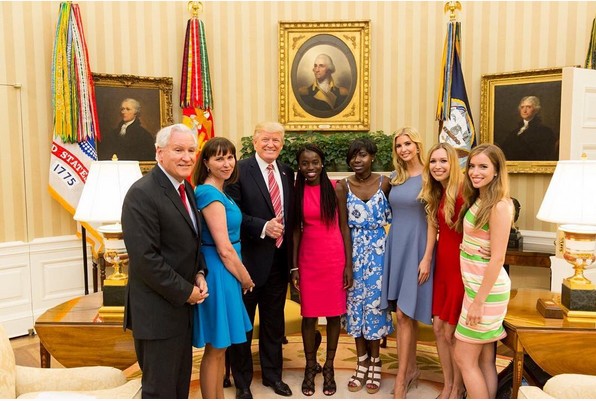 President Donald Trump and his daughter, Ivanka, hosted two of the Chibok schoolgirls who escaped the clutches of Boko Haram in 2014 at the Oval Office, Wednesday.

Yesterday, Joy Bishara , 20, and Lydia Pogu , 19, who were both able to escape from Boko Haram in 2014, met with the US President at the White House.

The duo and several other girls who escaped the Boko Haram base camp at the Sambisa forest, had moved to the United States to complete their education.
With the help of a Christian NGO and others, they recently graduated from Canyonville Christian Academy, Virginia and will be attending Southeastern University in Florida in the fall.

ChibokNigeriaschoolgirlsTrump
Share
Subscribe to our newsletter
Sign up here to get the latest news, updates and special offers delivered directly to your inbox.
You can unsubscribe at any time