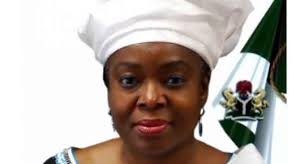 Former Minister of State for the Federal Capital Territory (FCT), Jumoke Akinjide, have been remanded in prison by Justice J.O Abdul-Malik of the Federal High Court sitting in Ibadan, Oyo State.

The Economic and Financial Crimes Commission, EFCC, on Thursday arraigned the former minister alongside a man, Olanrewaju Otiti, on an amended 12-count charge bordering on money laundering to the tune of N650 million.

The accused allegedly received the money from a former Minister of Petroleum Resources, Diezani Alison-Madueke, in the build- up to the 2015 general election.

The money was part of the $115 million allegedly disbursed by Mrs. Alison-Madueke to influence the outcome of the 2015 presidential election.

During Thursday’s proceedings, Bolaji Ayorinde, counsel to Mrs. Akinjide; Michael F. Lana, counsel to the second defendant, as well as Adeniyi Ishola, counsel to the third defendant, filed four applications asking the court to strike out of the charges against the first defendant, while also challenging the validity of the amended charge brought by the prosecution counsel, Rotimi Oyedepo.

Mr. Ayorinde told the court that the amended charge brought by the prosecution did not have a “seal” of the Nigerian Bar Association, NBA.

Counsel to the third defendant, Mr. Otiti, filed and served an application for bail and urged the court to grant his client bail on self-re cognizance.

Justice Abdul-Malik adjourned the matter to September 12, for hearing on the substantive matter and to July 6, for ruling on the bail application.

fraudJumoke Akinjideprison
Share
Subscribe to our newsletter
Sign up here to get the latest news, updates and special offers delivered directly to your inbox.
You can unsubscribe at any time