Flood disaster in Kogi as residents scarper, resort to use of canoes as floodwaters take over roads, submerge houses, worship centres, schools

As floodwaters take over major roads and several communities in Kogi State following ceaseless heavy rainfall, motorists and pedestrians have resorted to hiring canoes to ferry them their offices, workplaces, schools, markets and other destinations in a bid to carry out their daily activities.

Persecondnews reports that other means of transportation such as tricycles and motorcycles could no longer be used by people to wade through the floods as they are getting trapped.

Apart from the roads and streets that are flooded, farmlands, churches, petrol stations, schools, many houses, market places and worship centres are currently being submerged. 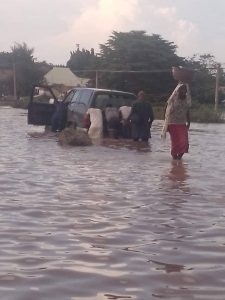 As a result of the disaster, hundreds of people have been rendered homeless while efforts are on to evacuate residents of the affected communities to safer places.

The impact of the floods is more severe in local government areas such as Lokoja, Ajaokuta, Bassa, Konton- Karfe, and Ibaji as the people continue to scamper for safety.

Meanwhile, owners of canoes are now making brisk business as passengers have resorted to hiring canoes at convey them to their destinations.

As of the time of filing this report, travellers are stranded as they could not pass through Lokoja, the Confluence State (of River Niger and Benue). It is the only state that shares border with about 10 states in the country. The states include Ondo, Ekiti, Kwara, Nasarawa, Niger, Benue, Enugu, and Anambra. 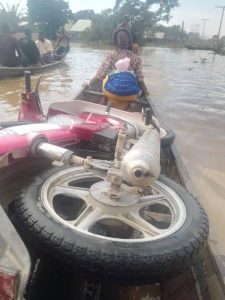 Some residents, who spoke to Persecondnews, called on federal and state governments for their intervention and move people from flood-prone areas to the upland.

The Nigeria Metrological Agency (NiMet) had warned of chances of flash flooding of the roads, lowly settlements and river channels, adding that “moderate and heavy rainfalls” would be experienced in the Northern and Central states.

FloodKogi State
Share
Subscribe to our newsletter
Sign up here to get the latest news, updates and special offers delivered directly to your inbox.
You can unsubscribe at any time