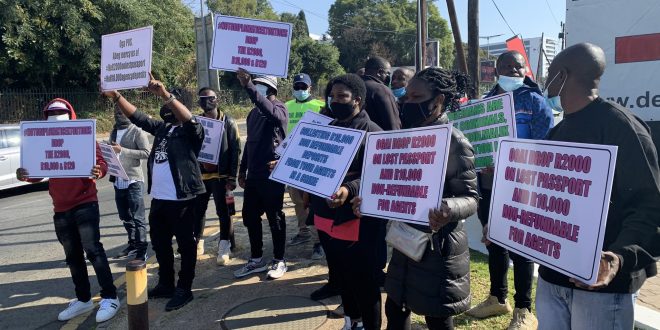 Nigerians living in South Africa on Tuesday staged a peaceful protest against alleged excessive charges by the Consulate General of Nigeria for consular services, including passport application, renewal and reissue.

Leading the protesters, NUSA President Adetola Olubajo, they marched to the Consulate General in Johannesburg, South Africa, where they met with the Consul General, Abdulmalik Ahmed, demanding the withdrawal of the charges they claimed were “Diplomatic Extortion’’.

But the Consul General in swift reaction dismissed the action as a vicious witch-hunt and the determination of the petitioners to distract and sabotage the mission.

The protesters also presented a three-page document of their demands captioned, “Letter of Protest Memorandum Against Extortion of
Nigerian Citizens Living in South Africa’’, capturing and expatiating on their demand.

“This memorandum is filed before you in affirmation of our request to remove various extra charges imposed on Nigerian citizens for passport application, renewal, reissue and other consular services.

“This is because Nigerians are struggling after COVID-19 pandemic and many are still trying to recover economically and that the charges
are completely uncalled for,” Olubajo said in a statement, a copy of which was made available to Persecondnews.

“Firstly, it is important to state that we have on different occasions raised these issues of extra charges, penalty for lost passport, illegal non-refundable deposits imposed on agents (passport and visa touts) and corruption at the Consulate General in Johannesburg with the Hon. Consul General, Mr. Abdulmalik M. Ahmed.

“After we visited to welcome you to South Africa in October 2020, we wrote on 6th November 2020 a letter of appeal to your office to address some concerns of Nigerians on service delivery at the Consulate General.

“When the Consul General imposed extra charges of R120 for passport capturing and penalty of R1500 on lost passport, we also wrote
appealing that you should reconsidered your decisions on the extra charges and penalty,’’ Olubajo said in the letter.

He noted that they wrote to the Nigerian authorities on Jan. 20, 2021, but claimed that instead of the Consul General considering their plea, he increased the penalty for a lost passport to R2000.

Olubajo said that NUSA wrote again to the Consul General on April 29,2021 to further appeal for the scrapping of these extra charges, butvinstead of him to consider their appeal, he replied them with a press statement full of insults, name-calling and threats.

“You made it clear in the letter that all Nigerians applying for lost passports are doing so with criminal intents and berated the activities of the passport touts.

“A copy of the shameful outburst is still on social media till date. We again wrote to you on 10th May 2021 making a number of demands.

“We are here today because none of our several pleas were considered instead, the extra and illegal charges were increased while other
status quo remains,’’ the NUSA president alleged.

Listing their demands at the consulate’s picketing, he said that the union was advising Ahmed to always seek information from credible
sources before making decisions that affect Nigerians in South Africa.

He also advised that contrary to the information from his “grapevine’’ sources, he should be aware that all foreign nationals in South Africa were required by law to carry their passports on their bodies at all times.

Olubajo added that failing to do so could lead to temporary detention until the persons in question were able to produce their original passport with immigration permits.

Among their other demands are: that the unreasonable R2000 penalty for lost passport and extra R120 for passport capturing (after payment of legitimate $106 dollars and extra charges of R50 imposed by Consulate and OIS services) should be stopped with immediate effect.

And the immediate removal of the R10, 000 non-refundable deposits collected from touts whom the consulate had christened agents and
refunds those whom it has collected money from already.

The union appealed to the Consul General to please do the needful as they would intensify their mass action if their demands were not met.

Olubajo urged the NUSA members to demand for their rights as they “deserve to be treated like human beings, you deserve to be heard when you are in pains by your government representatives, it is your right to express your frustration through a peaceful match.

“You are protected by the constitution of the Republic of South Africa, Section 17 of the Bill of Rights to protest against all forms of extortion, prejudice, intimidation and Human Rights abuses.’’

Reacting, Ahmed who referred to the consulate’s website for his position, said he was aware of the development, describing it as plot by a group of Nigerians in Gauten province to what they referred to as “diplomatic extortion and poor consular services.

“It is observed that the planned protest is the peak of a series of actions taken by the group against the Mission, including a petition
addressed to the ICPC by a member of the group, a petition addressed to the Comptroller General of Nigeria Immigration Service, as well deliberate campaigns of falsehood published in newspapers: all to no avail.

“The petitions and press campaigns are indeed reflective of a vicious witch-hunt and the determination of the petitioners to distract and
sabotage the mission.

“The issue of fees for all consular services has been approved by the government and not limited to passport alone.

“Also the penalty for lost passports instituted to check abuses and immigration violations is not peculiar to the mission in Johannesburg.

“It is on record that agents and their accomplices have always collected and pocketed these fees even before the current order aimed at streamlining same, for accountability,’’ the consul general posted on the website.

It said that the mission was conscious of the antics of some elements in the Nigerian community and has therefore, commenced consultations with well-meaning Nigerians with a view to addressing some of the issues. 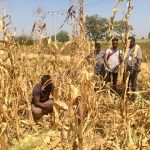 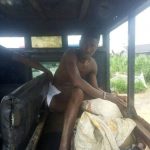