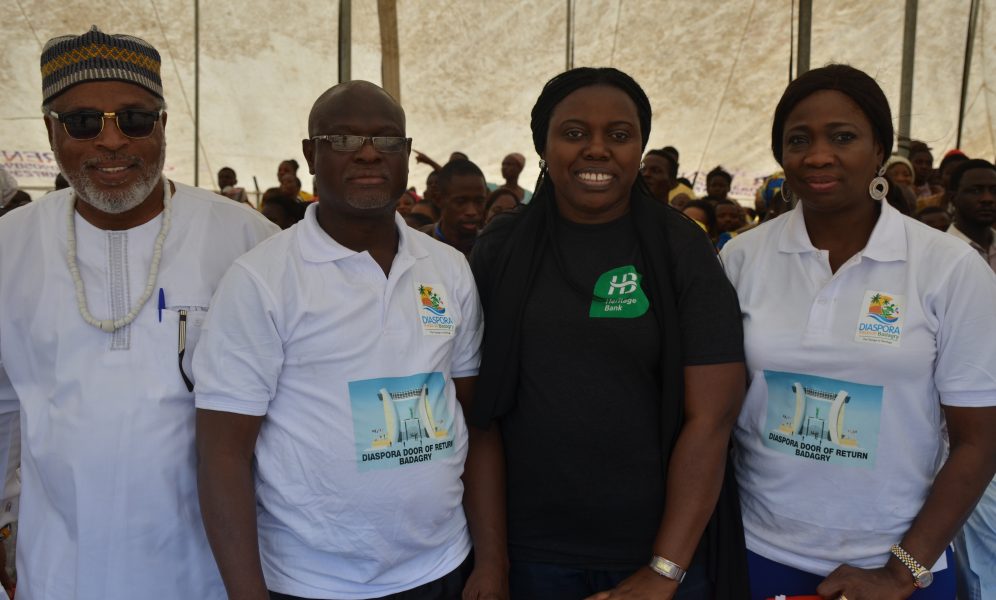 Heritage Bank Plc has partnered with the Office of the Senior Special Adviser to the President on Diaspora and Foreign Affairs and the Lagos State Government (LASG) to organise the 2017 edition of Diaspora Festival Badagry with the theme Door of Return Ceremony Badagry.

It was also an advocacy programme that raised awareness about the continuous fight against oppression, neo-colonialism and enslavement and represented a symbolic boat trip by notable black persons in the Diaspora (emigrants, descendants of slaves and leaders of thoughts) where the boat convey them to the ‘Point of No Return’ in Badagry which is the door way through which slaves were charted away as chattels to the plantations in the Americas, with the intention of never to return to their homeland again.

The event was graced by senior officials in the Presidency, traditional rulers, corporate bodies and tourists who travelled from far and near to witness various activities that were featured, a development which made the ancient city of Badagry to come alive.

Speaking on Heritage Bank’s involvement in the programme, Mrs. Ozena Utulu, a member of the Bank’s Brand Management & Compliance Unit said Heritage Bank partnered with the organisers of the fiesta because it was an event that promoted the African heritage and culture and resonated with what the brand stood for.

She said, “Heritage Bank speaks and is proud of the African cultural heritage, which is the essence of who and what they are,” adding that the bank is committed to Africans in Diaspora because when they returned, they will need a financial institution to bank with and Heritage Bank will be there to care for them.

Also speaking during the event, Mrs. Abike Dabiri-Erewa, the Senior Special Adviser to the President on Diaspora and Foreign Affairs who declared that the ‘Door- of- No-Return made popular during the transatlantic slave trade in Africa has now become the Door of Return to Africans in the Diaspora through Badagry, also noted that the development would showcase the African continent to the world in good light and on a positive note.

The marketing consultant to the project, Mr. Rufai Ladipo, CEO of Agile Communications Limited said the Diaspora Festival Badagry is an iconic and symbolic festival with a long tradition of celebrating the best in diversity in a rich African culture and heritage.

“Over the past five years, this much loved festival has attracted 500,000 footfalls as well as national and international audiences,” Ladipo observed, adding that the festival has gained considerable traction as one of the West Africa tourist attractions in the month of August which is recognised internationally as a tourism month.
He said the festival is a celebration of the strong seated roots in Africa cultures, its spread and its influence in the Diaspora, remarking that the festival is a platform that amplifies and draws awareness to modern slavery and neo-colonialism and remembers the victims of the transatlantic slave trade.

Besides, he said the festival sought to showcase the growth, beauty, grace and diversity of rich African culture and served as a beacon for Diasporas to relate with their heritage and found their home